Treating advanced prostate cancer typically involves surgery — to reduce levels of testosterone, which fuels the growth of tumors — or giving drugs that blockade the androgen receptor (AR), which responds to testosterone by stimulating cancer-growth genes.

While these measures can keep the disease at bay initially, resistance almost always occurs as the androgen receptor becomes re-activated and resumes signaling the tumor-growth genes, even when testosterone levels have been dramatically reduced. This condition is known as castration-resistant prostate cancer, and there is currently no curative therapy. A number of “next-generation” androgen pathway blockers have been developed and are in use, but in all cases resistance occurs.

Now, aiming to discover new targets for blocking androgen receptor activity, a Dana-Farber-led team has identified a critical regulator of AR signaling that prostate cancer cells depend on, according to their publication in Cell Reports. 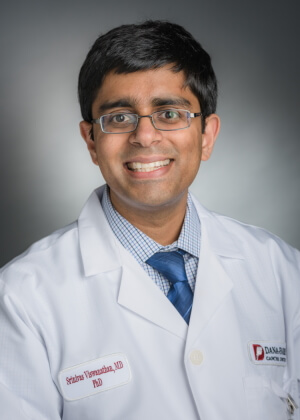 In the laboratory, the team showed that inhibiting this regulator — a protein called PRMT1 — reduced androgen receptor activity and blunted its effect on cancer genes that whose expression was elevated by the AR receptor. Furthermore, inhibiting PRMT1 slowed the growth of several types of prostate cells in which the androgen receptor was active.

“These results suggest that the growth-inhibitory effects of PRMT1 inhibition in prostate cancer cells are specifically mediated through the AR axis,” say the researchers, led by Srinivas R. Viswanathan, MD, PhD, a genitourinary oncologist at Dana-Farber, and Peter Choi, PhD, of the University of Pennsylvania. Furthermore, the scientists say that “AR-driven prostate cancer cells are uniquely susceptible to combined AR and PRMT1 inhibition. Our findings implicate PRMT1 as a key regulator of AR output and provide a preclinical framework for co-targeting of AR and PRM1 in advanced prostate cancer.”

The scientists noted that these laboratory-based findings could lead to the development of strategies to target AR and PRMT1 in treating advanced prostate cancer. This approach has not yet been tested in human studies, but several PRMT inhibitor drugs are being investigated in clinical studies.