Born premature at 25 weeks in April 2021, Mateo had a PICC line (similar to an IV, but a thicker and more durable tube) placed in his right arm to deliver fluids, nutrition and medications into his body. The PICC line was removed when an infection and a blood clot developed.

The infection was successfully treated, but Mateo developed a chylothorax, a rare condition that occurs when leakage of lymphatic fluid accumulates in the space around the lungs.

“He had approximately 10 chest tubes in two months because that was the best way to get the fluid out,” said Mateo’s mother, Robin Watkins. “He had to be intubated and required various ventilators to help him breathe. He overcame multiple infections and close calls.”

An echocardiogram confirmed that the swelling and excess fluid were caused by the blood clot in his superior vena cava vein, the major blood vessel connecting the upper body to the heart. 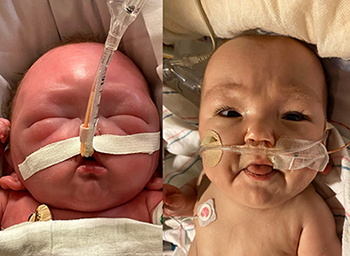 Mateo, before and after the cardiac catheterization

Mateo was transported to UC Davis Children’s Hospital in August for an interventional cardiac catheterization that proved to be a game changer. The procedure lasted five hours and successfully restored blood flow that was obstructed by the blood clot.

“Dr. Ing was able to get past the old blood clot and restore the blood flow in the vein. It was life-saving for our son,” Watkins said.

Two stents were placed in Mateo’s superior vena cava and the innominate vein, another major vein in the thorax. The positive effects of this cardiac catheterization were seen almost immediately once normal blood flow from the head and neck back to the heart was restored. His chest tube was removed the following day following the successful procedure. 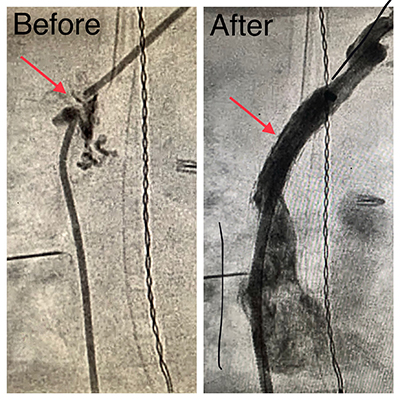 A before and after look at Mateo’s angiograms show that blood flow was successfully restored after the procedure.

His swelling improved, and Mateo was able to open his eyes again.

He was alert. He was able to transition from a specialty formula to breastmilk. He could watch his crib toy as it rotated above his head to music. He could track the voices of his parents. He was feeling and looking better.

Mateo was discharged from UC Davis Children’s Hospital on Aug. 25 and transferred back to their local hospital for care.

“Dr. Ing really changed Mateo’s trajectory. Now he has a chance at a better quality of life. Now we can focus on taking care of his lungs and development,” Watkins said. “We are so grateful for what Dr. Ing was able to do.”