Surrounding the rim of the hip socket like a gasket, the labrum is composed of dense fibrocartilaginous tissue and serves to distribute contact pressure across the articulating surfaces of the hip and reinforce joint stability. Labrum tears, in which portions of the labrum separate from the socket, are often associated with dysplasia of the hip. Hip dysplasia is the term generally applied to conditions characterized by shallowness at the acetabular socket resulting in insufficient coverage for the femoral head and structural instability at the hip.

Hip dysplasia is more common in women than men (~80% of all patients with dysplasia are female), and often affects young, active individuals. Prominent symptoms include deep lateral hip and groin pain that is exacerbated by standing or pivoting or flexing the hip. Dysplasia may become apparent at any time, from child birth on, but may not become symptomatic until a patient is an adult.

The Penn Hip Preservation Center offers an array of diagnostic and therapeutic options for individuals with hip dysplasia. Some patients with hip dysplasia may benefit from conservative management to improve soft tissue support for the hip, including activity modification and physical therapy. For persons with more advanced dysplasia, the cornerstone of treatment is open periacetabular osteotomy (PAO), often accompanied by concordant surgeries to correct associated soft tissue and labral injury.

PAO can be an appropriate procedure for patients in their teenage years through middle aged adults (40s-50s). PAO alters the pelvic and hip joint anatomy to correct hip dysplasia without replacing the hip. The objectives of PAO include improvement in pain and stability. There is good evidence that PAO can reduce the likelihood of osteoarthritis or progression to total hip arthroplasty.1

At surgery, trackers were placed at the knee, the iliac crest, the greater trochanter, and acetabulum to orient and calibrate the MAKO System. The acetabular registration was then carried out to ensure proper alignment and placement of the planned prosthesis. The software calculated the bone resection, implant size and offset needed to make Mr. R’s leg length was as close to perfect as possible. Once these steps were completed, reaming of the acetabulum was carried out with adjustments to the angle and depth under the guidance of the robotic arm.

The acetabular component was then press-fit into the socket at precisely planned angle provided by the robot and then impacted. Next, femoral preparation performed using broaches to machine the bone for the final implant. After each step, the probe located the marker screw at the greater trochanter and the patellar electrode to insure proper restoration of leg length and offset.

Mr. R was walking within a few hours of surgery, had physical therapy that afternoon and went home the next day. At his six-month follow-up, he was pain free and bicycling 30 miles per week.

Mrs. G, a 31-year-old working in the financial industry, came to the Penn Hip Preservation Center with a 10 year history of right-sided hip pain that began in college, when she was a competitive volleyball player.

Involved now in competitive running, Mrs. G described the pain as a dull ache in the front and side of her right hip that was particularly acute when standing from a sitting or prone position. Lately, the pain had persisted for several days each time she went running. 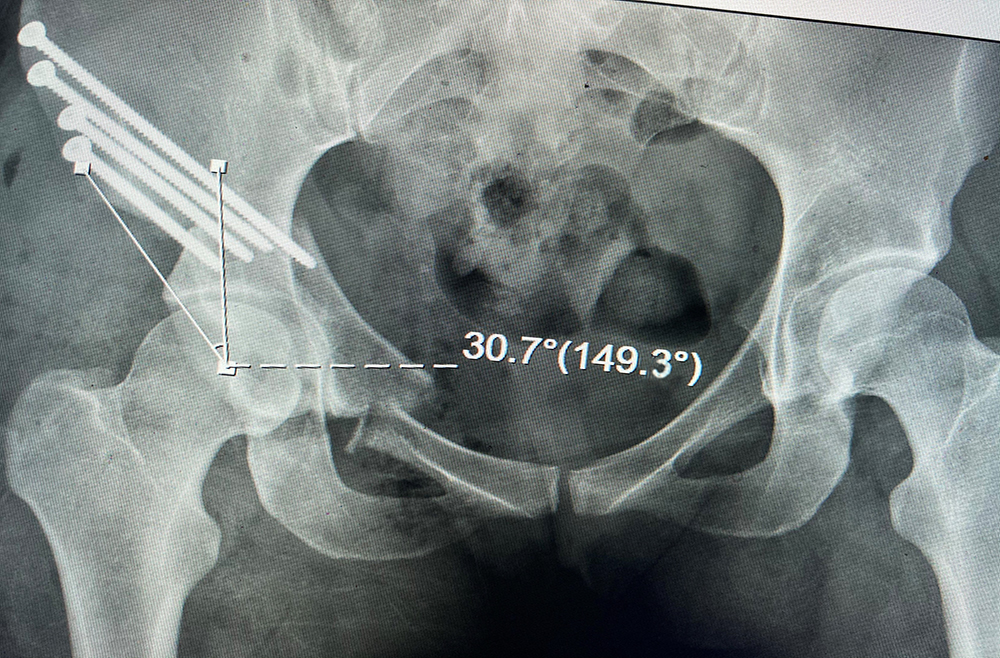 Mrs. G’s recent history included physical therapy and prescription anti-inflammatory medications, neither of which resolved the pain. Her visit to Penn was prompted by an x-ray ordered by her primary care provider that found a lateral center edge angle <20°, diagnostic for dysplasia.

At Penn, Mrs. G was treated by Christopher A. Anthony, MD, who ordered an x-ray and MRI. The former confirmed Mrs. G’s dysplasia. The MRI found a labral tear at her right hip, and healthy cartilage, suggesting that the onset of osteoarthritis had not yet occurred. Dr. Anthony then talked to Mrs. G about the history of her hip issues, and the pros and cons of surgery.

Wanting to both avoid arthritis, if she could, and continue running with her native hip, Mrs. G chose to have a combined PAO with arthroscopic surgery to repair her labrum.

During surgery, the labral tear was repaired arthroscopically with anchor sutures. Mrs G then underwent a PAO to correct her hip dysplasia, during which her pelvis was cut to reorient the socket position and fixed in place with four screws. An x-ray was then taken to confirm the position.

Mrs. G remained in the hospital for two days. Thereafter, she had partial weight-bearing for four weeks, and at six weeks was fully weight bearing. At four months, she was running again.

About The Penn Hip Preservation Center

The Penn Hip Preservation Center is focused on helping adolescents, young adults and active adults who are looking for strategies to postpone or prevent hip replacement surgery. If left untreated, chronic hip pain may lead to arthritis and eventual hip replacement. The goal of our Center is to take a patient-centered approach to alleviate pain and improve function across the spectrum of hip care.